So many different ideas!

This week in Alonim, we began reading our first Torah text of our theme. We started with only 2 short lines of the text, because there was so much to wonder about just in those 2 lines! Since it’s a short text, I will include it here.

Alonim asked a big question: What do these 2 lines mean? We had many different ideas. 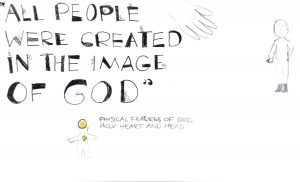 One child said that all people were created in the image of God, so if we look like God, then God assumes we have to BE like God. 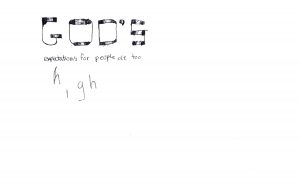 Another child said that God’s expectations for the people are too high. God’s telling them to be holy, but it’s not an easy thing to do. Because God’s God, he kind of became instantly holy for creating people, which means it was kind of easy for God to become holy so he thinks, oh everyone else can too cause they were created in the image of me. 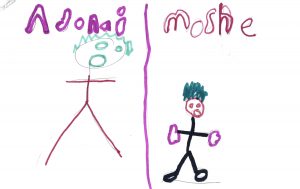 Yet another child said: “Adonai is all-powerful and Moshe is still powerful but just not as powerful, that’s why I drew him a little bit smaller. It’s basically like stairs, so Adonai is the top step, Moshe is lower then lower then lower until the Israelites are basically at the bottom. Where you are on the step is determined not really by how Adonai treats you but how he thinks about you. So if he thinks of Moshe as a good person, but he might think of the Israelites as not like Moshe.”

There were many different ideas in Alonim this week, and I was excited to see children build upon and strengthen each other’s ideas. I am looking forward to seeing children work together on their ideas even more as we move forward with our theme.