This week in Shteelim, we were able to explore two of our areas of focus – the concept of הפקר (hefker – ownerless) and counting בעברית (b’Ivrit – in Hebrew) – at the same time!

This is when the interesting problems began. The farmers set out with the challenge of taking only as much as they need while leaving enough for everyone else. Since we went around to gather one and a time, the children who went last had to trust that the children going first would not take more than their share. The children going first had to eyeball the bounty of produce and estimate how much they could take. Each farmer walked around with a basket to gather from other farmers’ fields.

Gathering from the field during Sh’mitah.

Once we came back together to see what we had gathered, Shteelim realized that some had more food than others, and those who gathered last did not have much left to choose from. I asked: “Even if it’s not equal, do you think you have enough food so you won’t be hungry?” After looking over what they had, the children decided that they did not have enough to eat. Those children who had more than their share began to give away some of the produce. 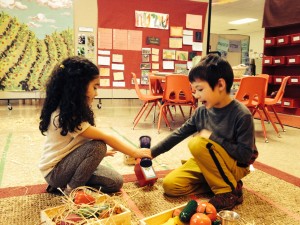 Sharing what was gathered.

One of the things the children decided to redistribute were the “edible seeds.” We have been practicing counting בעברית (b’Ivrit – in Hebrew) a lot over the past few weeksin Bet Shteelim, and these farmers were eager to count out בעברית (b’Ivrit – in Hebrew) how many of each item there were and divide them evenly by three. We counted ענבים (anavim – grapes), תפוחים (tapuchim – apples), edible seeds, and more. 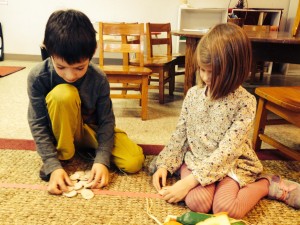 I asked Shteelim: Does everyone need the same number? Do you think some people are more hungry than others or have bigger families?

“I have five people in my family so I do need more,” one child explained.

Another said: “I don’t need as many because I only have three people in my family.” 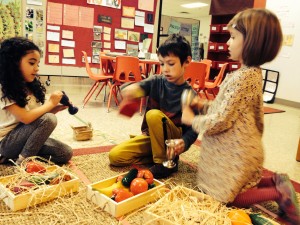 Sharing and redistributing some food.

We renegotiated a little bit, and then one child suggested that we need to still leave more of our produce out for “poor people.” The farmers had set up a section for food left out, and one child suggested we have a sign to label it so people know they can come and take as they please. 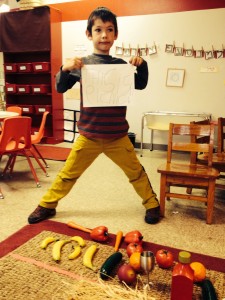 We set out a bounty of food and made a sign so hungry people would know it was hefker. (Sign reads: “This is a picnic.”)