This week in Shteelim we’ve had a chance to continuing exploring in the agricultural play space, where Shteelim have acted out their preparation for the שמיטה (Sh’mitah – Release) year, as well as what they would do during the year itself. 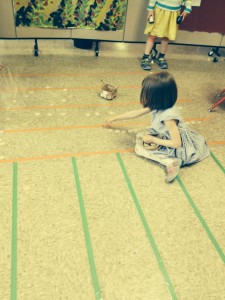 Planting the seeds of different crops in each row during a regular farming year. 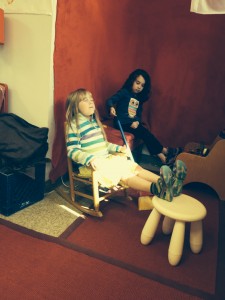 After extensive preparation, these farmers rest and relax in the sun during the Sh’mitah year.

One of the big ideas that I can see has defined Shteelim’s understandings of Sh’mitah is that the year is about “sharing with the poor.” This came across in play as Shteelim imagined the big meals they would cook for hungry people with the perennial crops growing on their farm. A lot of our play involved gathering up all the crops and presenting them to hungry people as a gift. 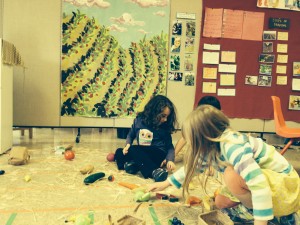 Gathering crops to make a meal with.

This focus led us to explore the distinction between giving gifts to the poor versus having land that is הפקר (hefker – ownerless) for one year. Shteelim were able to really grapple with this difference, and how it might translate in their actions on the play farm. Maybe they would “let people come pick,” instead of picking the food for them.

However, one of the questions that arose among Shteelim during this exploration was still, as one 5-year-old put it: “How can you make sure rich people aren’t coming to your farm to pick your food?” Another 6-year-old asked: “What if a rich person comes and steals all the food and there’s none left?” Another Shteelimer suggested calling the police in that situation. The same 5-year-old came up with the idea of putting up fliers that give rich people incorrect directions to the farm to trick them.

Shteelim’s concern with making sure that “rich people” did not steal the food from their farm was striking to me. It has made me realize how difficult a concept it is to grasp that the land and its produce is truly הפקר (hefker – ownerless). Why do we practice הפקר (hefker – ownerless), and why we do it only during Sh’mitah year? These are the questions I hope we can continue to explore in our farm play space and in conversation next week as we start to wrap up our theme.