Exploring the Parts of our Guf In Shalom Chaverim

This week in Shteelim, we dove in to our final theme of the year, שמיטה (Sh’mitah – Release). Our first week in this theme was guided by learning foundational knowledge about the שמיטה year and the farming process, generating many questions and wonderings about שמיטה, and keeping track of all the new information we learned. To do these things, we made a large “Know, Want to Know, Learned” chart where we added questions and new ideas each day.

We already knew some information about farming, mostly that farmers plant seeds and then pick produce during harvest season. But Shteelims had not yet encountered  שמיטה (Sh’mitah). We learned that the  שמיטה (Sh’mitah) year is a year of rest for the land, during which farmers don’t plant, tend to plants, or harvest. It comes every seven years on the Jewish calendar. This year, 5775, is a  שמיטה (Sh’mitah) year! Some commonly shared questions included:

– How do people get food during the שמיטה (Sh’mitah) year?

– Why is the שמיטה (Sh’mitah) year so rare, and why does it last so long?

In exploring some of these questions, we learned about the concept of perennial and wild vs. annual plants, and that people could get their food source from perennial and wild foods during a שמיטה (Sh’mitah) year. We also learned about the concept of הפקר (hefker – ownerless) – that all produce of the land becomes “ownerless” during the שמיטה (Sh’mitah) year, a concept we will be exploring much more deeply in the coming weeks. 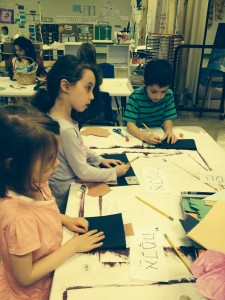 Shteelim working on their farming books. 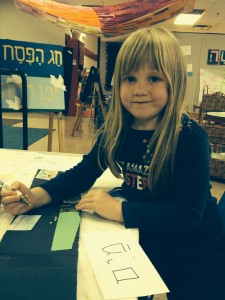 A Shteelimer works on the מים (mayim – water) step of her ספר (sefer- book). 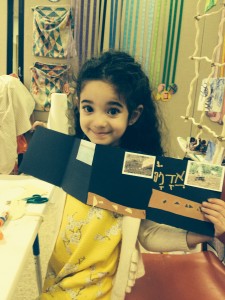 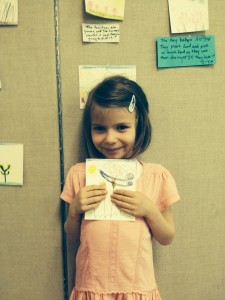 A Shteelimer chose to draw wheat, an annual crop that would grow in a regular year.

Another child drew wild and perennial fruits – orange trees, apple trees, and grape vines – for the Sh’mitah side of our chart.

We’ll continue exploring what’s special about a Sh’mitah year and diving into some of the thought-provoking questions Shteelim asked this week as we go forward in our new theme!