Getting Ready for Seder

A Taste of Pesach

This week in Shteelim, we had nonstop singing, making art about, and playing with מה נשתנה (Mah Nishtanah – The Four Questions).

We finished making our fabric banners in יצירתיות (Yetzirah – creativity), which show each of the four questions as represented by the items that are different: מצה (matzah), מרור (maror), שתי פעמים (shtei f’amim – (dip) twice), and מְסֻבִּין (m’subin – reclining). We spent three weeks creating the banners, first sketching out the shapes of each item on draft paper, then choosing fabric, cutting out the shapes, and practicing and writing each of the words, arranging on the banner and gluing it all down. The final products were each unique, and Shteelimers brought them home to hang up or pull out at their own סדרים (sedarim) if they choose. 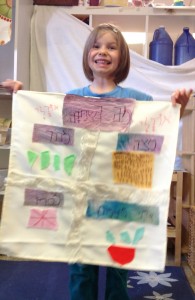 A Shteelimer holds up her Mah Nishtanah banner. 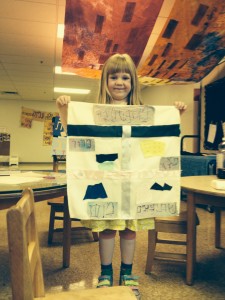 As we practiced singing, we played many games this week, using the words of מה נשתנה (Mah Nishtanah – The Four Questions) to play go fish, and singing while we played musical כיסאות (keesayot – chairs). 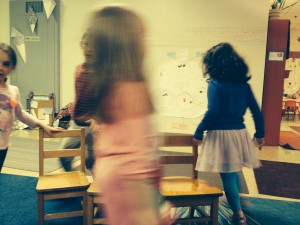 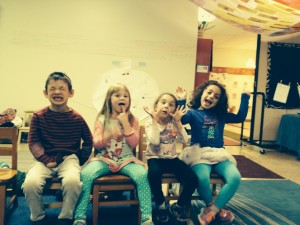 Even after a two week spring break, after a lot of practice this week Shteelimers were able to sing the four questions by themselves or with minimal prompting by the end of the week! Many of them are exciting to sing at family סדרים (sedarim).

In addition to all this singing, this week in Shteelim we also spent time engaging with each item on the seder plate and what associations to the Exodus story it hold for us.

We each tasted, touched, looked at and or/smelled each item on the seder plate. I asked Shteelimers what each item reminded them of, and they wrote down or drew their ideas, and stuck them on to our wall seder plate. 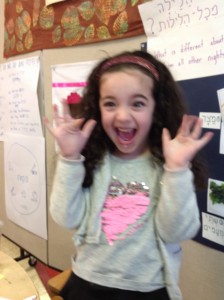 A few Shteelimers thought the Maror was very, very spicy and tasted too hot to eat. 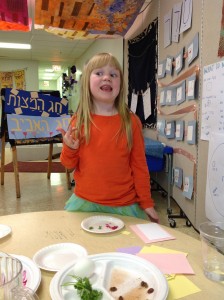 Others appreciated the taste of maror! 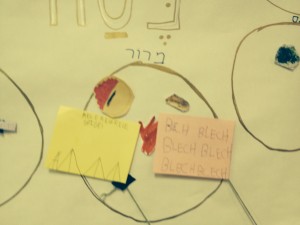 Inside the spot on the Seder plate, we wrote or drew what the item tasted or smelled like.

After we described it, I asked Shteelimers what that sensation reminded them of from the Pesach story. For example, when one Shteelimer said that the maror was very hot, I asked “What in the story was hot?” We remembered that it must have been hot in Mitzrayim when the Israelites were working in the sun. Another suggested it should remind us of when Moshe saw the burning bush. Shteelimers introduced many interpretations of the seder plate items as they connect to the Exodus story that I had never thought of.

We then drew pictures, cut out photos, and wrote about the part of the story each item reminded us of, and attached these associations to the wall. There were many ideas about the maror: 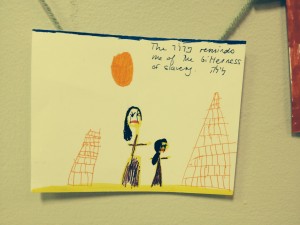 Eventually, throughout the week we filled in the whole seder plate with our sensory words and parts of the Exodus story we were reminded of. It became a web of connections. 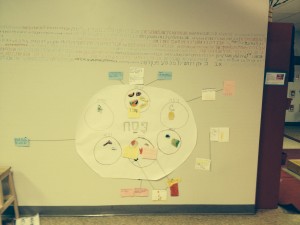