Shteelim Connect the Seder Plate to the Exodus Story

Over the past two weeks in Shteelim, we’ve started a full exploration of פסח (Pesach—Passover). Kindergarteners have been working on  מה נשתנה (Ma Nishtanah -The Four Questions) in new משחקים (Mischakim-games), making a fabric banner יצירה (Yetzirah-art/creativity), and lots of singing as we walk or play. Most Shteelimers will be ready to sing the מה נשתנה (Mah Nishtanah -The Four Questions) at their own sedarim, especially with some reminders over spring break!

In our exploration of פסח (Pesach—Passover), we’ve also learned each item that’s on the seder plate, and this week we’ve begun to think about which part of the שמות (Shemot – Exodus) story it reminds us of. Since we have been immersed in the first fifteen chapters of  שמות (Shemot – Exodus) for the past 10 weeks, children have a great recall of all of the parts of the story and were quick to come up with many associations for the כרפס (karpas – parsley), מרור (maror- bitter herb), חרוסת (charoset), ביצה (beitzah) and  זרוע (zroah – shankbone). 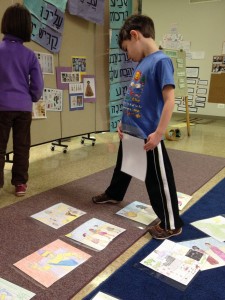 First, we laid out illustrations of the story in order while retelling. 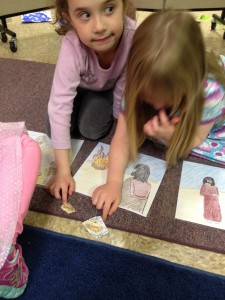 Then, we each took our own photo cut-outs of each item on the seder plate and put them with the scene they reminded us of, explaining the connection. These Shteelimers thought that the spicy kind of maror might be meant to remind us of when Moshe saw the burning bush. 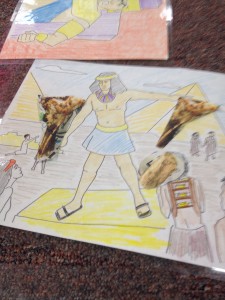 Two shteelimers thought that the zroah (shankbone) might remind us of how strong the Israelites had to be when they had to build the building for Pharaoh. Another child placed the maror in this scene because she thought it was meant to remind us of how bad they Israelites felt when they were slaves. 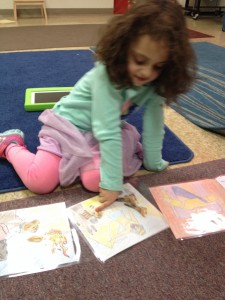 A Shteelimer shows how the zroah (shankbone) on the seder plate reminds her of the strength of the Israelites when they were slaves. Other Shteelimers suggested it may be to remind us of putting blood on the doorposts. 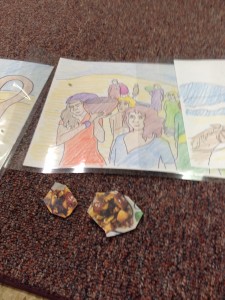 Two Shteelimers explained how the charoset reminds them of the sweetness of when they Israelites got to leave Egypt and go free.

I was very impressed with the creativity and interpretation of all Shteelim children in connecting parts of the seder to the narrative. To me, their answers reflected their understanding of the metaphorical quality of the seder plate, and a real familiarity with the story.

In discussing these connections, children were also excited to draw pictures of each item and glue them onto their own plate, while we explained to each other what each one meant to us.

Another special seder connection this week was in making our own חרוסת (charoset), which we were lucky enough to share with visitors Mrs. Stacey and Mr. Eddie. Our visitors came in on Wednesday to share a special tradition from their own family’s seder. 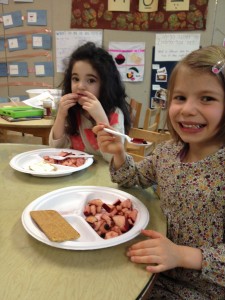 From his family’s seder table tradition, Mr. Eddie brought a huge כוס אליהו (Elijah’s Cup). Shteelimers loved passing it around, feeling how heavy it was and theorizing about whether Eliyahu was a giant or invisible. 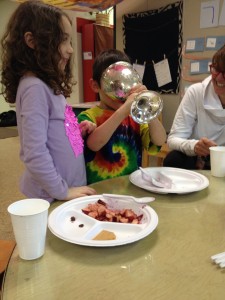 A Shteelimer takes a drink from the giant cup. 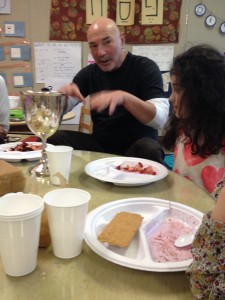 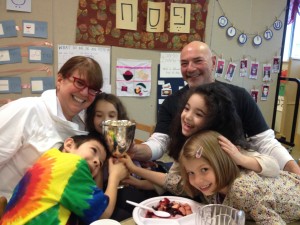 We had a lot of fun with our visitors!

Shteelimer’s explorations of פסח (Pesach—Passover) will continue in the week after spring break! Have a great break!