Finishing Up Costumes with Shorashim and Shteelim

This week in Shteelim, we began our exploration of פורים (Purim) — reading the story of Esther, putting on puppet shows, making our own puppets, baking hamantaschen and giving them away! 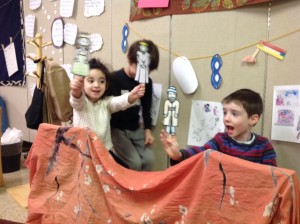 Three Shteelimers act out the story of Purim using puppets and the puppet stage they constructed.

After baking hamantaschen this Tuesday, Shteelimers asked if they could give these treats to their parents, siblings, and grandparents. So we wrapped up the treats we had made in bags with פירות (peyrot – fruits), tied them with yarn and tissue paper, and sneakily hid them from parents in order to surprise them. We were able to be flexible in the moment and follow the children’s interest  in preparing gifts for the rest of the day.

A Shteelimer wraps hamantaschen he made for his grandma.

With the rest of the treats, we put them on a tray and delivered them to friends in the JCC and Rodfei Zedek משרדים (misradim – offices). 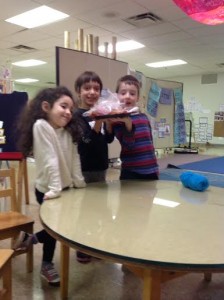 Excited to give away the treats we prepared!

A Shteelimer gives his hamantaschen to his grandpa in the lobby.

We practiced our delivery by saying פורים שמחים (Purim Sameach – happy Purim!).  As soon as we got downstairs, Shteelimers grabbed their bags and went up to every person they saw in the building. It was a great intro to משלוח מנות (mischloach manot — “sending of portions”/giving treats to friends) and a day of sharing in each other’s generosity.