Who is This God Character Anyway?

We have entered the world of שמות (Sh’mot – Exodus) in kindergarten over these past weeks — exploring the first stories of the book through different types of play. After listening to the story, children have chosen to build with different materials, put together costumes, act out the story, make puppets, put on puppet shows, make desert landscapes for building out of paper mache.

I’ve been particularly interested in how the children have focused on creating costumes for the characters of the story with the different scarves and fabrics we have set out. A lot of the creativity, expression of original ideas, and fun for the kindergarteners comes in the costume-creating process, and not necessarily the acting out.

This week, one child picked out burlap pieces of fabric and draped them over her shoulders and put a jute bag on her back in order to become Jocheved, Moshe’s mother, because, the girl said, “Since she was a slave in Egypt she would have had dirty clothes.” This choice showed her original ideas about the story and expressed them through the clothes.

Similarly, another child chose to wear gold beads to portray Pharaoh’s daughter, explaining that she was “fancy, because she was like a princess.” 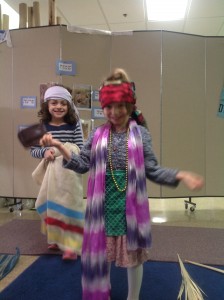 Pharaoh’s daughter bathes in the Nile river while מרים (Miriam) watches from the bulrushes. 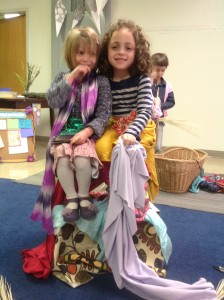 Posing on the throne we created for Pharaoh.

After seeing the way kindergarteners’ ideas have been animated by costume choices, I want to follow their interest and work with costumes in a longer-term project throughout the theme. We just dipped our toes in this week by asking questions about fabric choices and why the character might wear them. More is to come on our budding costume project and the ways kindergarteners are creatively interpreting שמות (Exodus) through clothes!