Cooking and Creating to Celebrate Chanukah

Over the past three weeks, Nitzanim kindergarteners have heard three different endings to the Chanukah story: from Maccabees I, Maccabees II, and the Talmud. As kindergarteners heard the story, I encouraged them to close their eyes and imagine what the temple being described really looked like. Then, we moved into CREATING the temple they imagined. Each kindergartener got a choice of the set of materials they used. Different materials: gems, magna-tiles, blocks, shells, branches, pawns were set out to be used creatively. Some children chose to work alone, and others worked in pairs.

Here are some of their creations:

After we read Maccabees I, one child focused on the detail that some Jewish people chose to exercise in Greek gyms at the time leading up to the war. He built “Syrian Greek people exercising in their gyms with weights.” 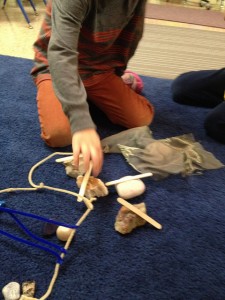 The popsicle sticks are the dumbells.

I was really interested in the way that many children, when they presented their creation to the (kevutzah — group), acted out a dramatic scene that involved moving pieces around. Many of their creations were dynamic and included characters acting, not just a built structure. 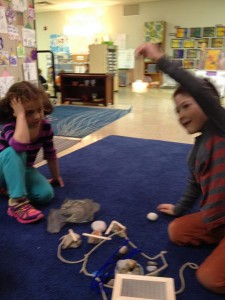 A kindergartener acts out the Jews re-entering the temple. 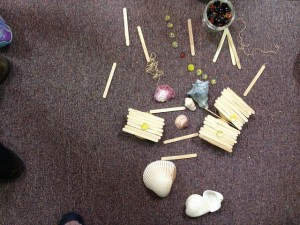 One kindergartener built “three rooms for praying,” and a menorah (the yellow stones are candles, and the red stone is the shammash). 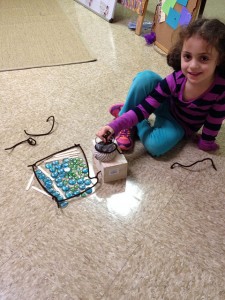 This ניצן (nitzan) is holding the “special lamp” of her temple.

In building their vision of the ending of Maccabees II, kindergarteners focused on the fact that Jews did not get to celebrate sukkot, so they celebrated when they re-entered the temple and made it special again. 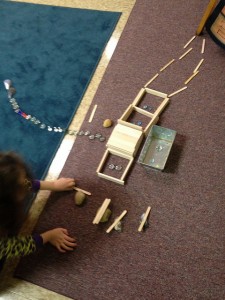 A team of two built this structure based on Maccabees II. The popsicle stick roof is like a sukkah, and the line of stones is “Jewish people waiting to get into the temple.” “They wanted to be together,” the team explained. The kindergartener whose hands you see is touching “a rabbi lighting the lamp.” She was acting out the lighting. 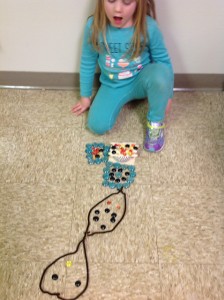 This kindergartener made לולב (lulav)-shaped rooms in honor of the mention of Sukkot in Maccabees II. (See pipe cleaners).

The חנוכייה (chanukiyah) and the שמן (shemen — oil) were the main features of kindergarteners’ creations based on the Talmud’s answer to the question “Why Chanukah?” 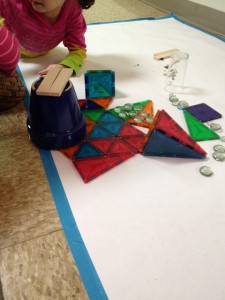 In these kindergarteners’ interpretation of the Talmud, they built a circular menorah with clear stones.

Stay tuned for more of our creations based on the Rabbinic source for Chanukah (Babylonian Talmud Tractate Shabbat 21b)!