We’ve started discussing a brand new story this week as part of our הלל (Hallel) theme, a story from the book of Daniel (DanielStoryforK-2). Daniel comes from the כתובים (Ketuvim—Writings) section of the תנ׳׳ך (Tanach—Hebrew Bible). This story is an example of a הלל (Hallel) moment. Before we start learning why it’s a הלל (Hallel) moment, we are first discussing the questions that we have about the story.

One question that the first and second graders have raised is: “Why was King Darius forced to follow his law and throw Daniel into the lion’s den even though he liked Daniel?”

In the words of one first grader during a one-on-one conversation with the מורה (morah–teacher):

First Grader: Why didn’t the king just say, “I’m the king so I can decide what happens.” Because if he really liked him he could say, “No. I’m the king. I can save him.”

Morah: Why do you think that didn’t happen?

First Grader: Because it’s a law but he can break the law because he’s the king.

First Grader: No but that’s not the law of the world.

These are some really BIG thoughts. Why couldn’t King Darius break the law? Why at the end of the story could he reverse the law? Hopefully we’ll be able to figure out some answers for ourselves as we figure out what הלל (Hallel) has to do with it all.

In other news, we had a very productive זמן חקירה (zeman chakirah—exploration time) working on our Ivrit challenges. 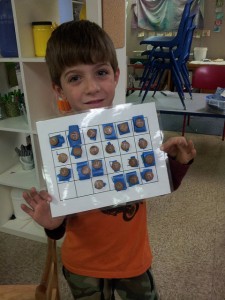 This first grader matched all of the אותיות (otiot–letters) and put them in aleph-bet order. 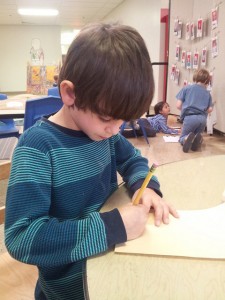 This first grader showed an interest in Ivrit script and worked with his מורה (morah–teacher) on writing his שם (shem–name) in script.