The Shofar Reminds us to Try New Things

To start our סליחה (slicha-forgiveness) theme, we have been thinking about the way we feel when someone hurts us. We have connected our personal experiences to what the Torah and the Rabbis say about revenge and grudges. Nitzanimers have spent the last week giving personal definitions of these terms. For example, one NItzanimer said that revenge is “if my brother hits me and I hit him back.”  Another Nitzanimer said a grudge is “being mad at my grandpa for two weeks for teasing me when I told him not to.”

Today Nitzanimers heard from the early Rabbis about their examples of revenge and grudge. All seven first and second graders unanimously agreed with the Rabbis’ example of revenge. However, many Nitzanimers objected to the rabbis’ example of a grudge. We’ll keep trying to understand these concepts and link them to סליחה (slicha-forgivenesss) as the theme continues.

Nitzanimers are still choosing to explore the ideas of revenge, grudge, and סליחה (slicha-forgiveness) through skits. Today, children made skits about Rosh Hashana and some integrated סליחה (slicha-forgiveness) concepts into their skits. The skits change every day as children’s conceptions of slicha develop and as we learn more about Rosh Hashana. The מורות (morot-teachers) have been very impressed with the way children have worked together to develop skits and communicate their understanding of the theme. 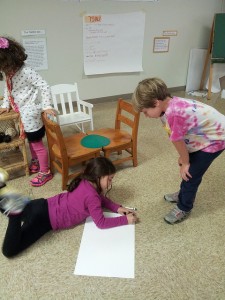 This group of one kindergartener, one first grader, and one second grader developed a skit about someone who loses their Rosh Hashana decorations. Here they are writing down their ideas for a skit. 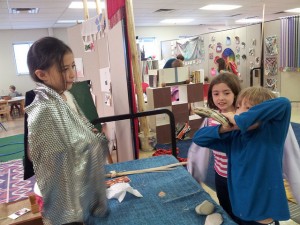 This group of two second graders and one first grader developed a skit about rabbis who could not agree whose turn it was to blow the shofar on Rosh Hashana. Here they are dressed in costume pretending to blow the shofar.