“You shall count for yourselves seven weeks, from when the sickle is first put to the standing crop shall you begin counting seven weeks. Then you will observe the Festival of Shavuot for the Lord, your God.” (Deuteronomy 16:9-10) 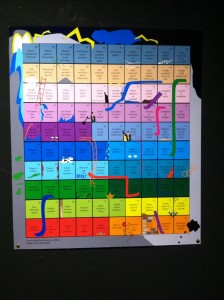 Chutes & Ladders game about the 49 days between Pesach and Shavuot. From the Museum of ImaJewnation. By Donna Rosenberg & Sarah Willis.

According to the Torah (Lev. 23:15), we are obligated to count the days from Passover to Shavuot. This period is known as the Counting of the Omer. An omer is a unit of measure. On the second day of Passover, in the days of the Temple, an omer of barley was cut down and brought to the Temple as an offering. This grain offering was referred to as the Omer.

Every night, from the second night of Passover to the night before Shavu’ot, we recite a blessing and state the count of the Omer in both weeks and days. So on the 16th day, you would say “Today is sixteen days, which is two weeks and two days of the Omer.”

This period is a time of partial mourning, during which weddings, parties, and dinners with dancing are not conducted, in memory of a plague during the lifetime of Rabbi Akiba. Haircuts during this time are also forbidden. The 33rd day of the Omer (the eighteenth of Iyar) is a minor holiday commemorating a break in the plague. The holiday is known as Lag b’Omer. The mourning practices of the omer period are lifted on that date. The word “Lag” is not really a word; it is the number 33 in Hebrew, as if you were to call the Fourth of July “IV July” (IV being 4 in Roman numerals).

Blessing for Counting the Omer: