What About the Plagues?

Written 100% as dictated by Shteelim

– We used the Torah, a Haggadah, and some children’s books to help us figure out the details. When we got stuck on why Moshe took Aaron with him, we got out a Tanach, and read the actual Torah text to see what it said. 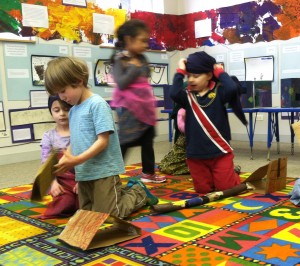 The Israelites are slaves. It is hard work building pyramids.

Pharaoh says to the Jews, “Work, make some pyramids and a sphinx.”

So the slaves made bricks and mortar and they used clubs.

(Here the children decided that they needed to make pyramids and a sphinx as sets.) 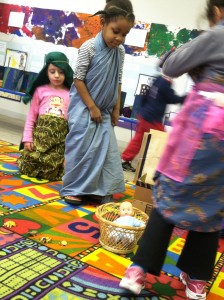 Pharaoh’s daughter sees a basket with a baby in it on the river.

Pharaoh says, “All the baby boys have to be killed.”

Moshe’s mom put the baby in the basket in the river.

The Egyptian Princess goes to the river with her friend and sees baby Moshe in the basket and in the water.

“Oh my gosh! I am going to take this baby out. I will give to Pharaoh and both of us will raise the baby.”

Miriam watches and goes to get a nurse to nurse it. It is his own mom! 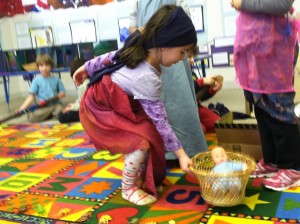 The princess did not know that Yocheved was the baby’s mom.

The baby grew up.
Moshe sees an Egyptian hitting a Jewish person.
Moshe hits the Egyptian.
Moshe runs away because he was afraid. He felt like he did something wrong.
“I am Moshe. I am a shepherd.” 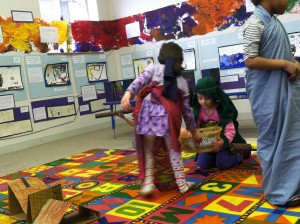 …and gives Moshe back to his mother! 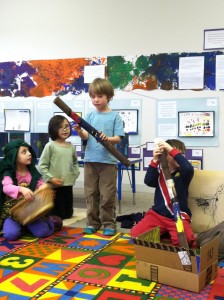 Moshe (with his fancy staff). 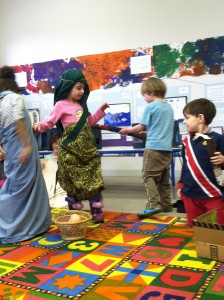 Moshe sees a burning bush in the wilderness.

Moshe: “No because Pharaoh is just going to say no. I am too shy.”

God says, “Take your brother Aaron with you.”

Aaron throws Moshe’s staff on the ground and it turns into a snake.

Aaron and Moshe: “My staff is going to turn into a snake because it is God.” 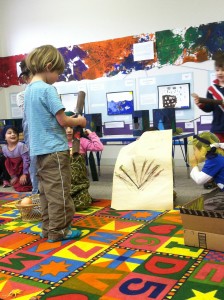 Moshe at the burning bush. 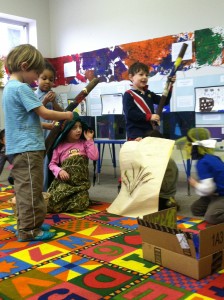 Aaron will go with Moshe to Pharaoh. 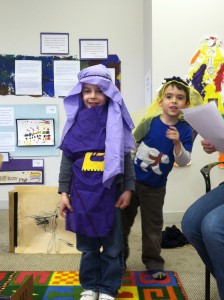 (…and Nitzanim completed the story with their own play!)