Shteelim started talking about the upcoming holiday of Pesach today.  We introduced the story, and began to form some questions we had about the story. Over the next few weeks, we will explore the Passover story in more detail, as well as understand some of the rituals and symbols, and also explore the Passover story in multiple mediums, including Haggadahs and the Torah.

When the children were done working on illustrating the Passover story, they set out to create some of the scenes with our animals and blocks.  They were drawn to the part of the story where the slaves are working hard in the sun to build. Interestingly, the slaves were always working in pairs!  This led to discussions about Egypy, mummies, Pharaohs, King Tut, and how hot the dessert must be!  We are looking forward to exploring these ideas in the weeks to come. 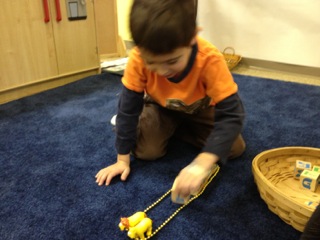 “The Lions are the slaves. They are pulling the blocks to make the pyramids.” 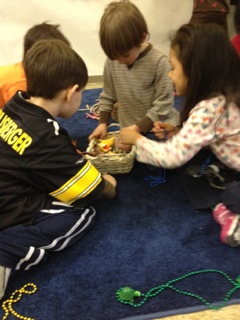 “Are the frogs the slaves?” 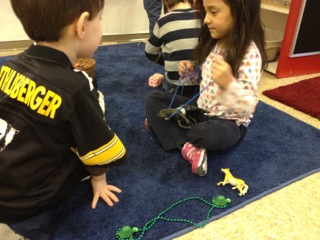 “Yes, the horse can be the Pharaoh.”