Using the שמע to connect to עם ישראל

Making Mezuzot: An Entryway to the Shema for Shorashim

When Just Listening Is Not Enough

When we started reading the book, three Nitzanimers sat at the table in the middle of the room, eating כיבוד (kibud – snack). The other children in the room were talking loudly, working on Hebrew letters at another table.

By the middle of the book, the entire room was silent. Everyone’s eyes were glued to the book.  The children’s bodies grew still.

At the last page, the children began asking if we could read the book again. 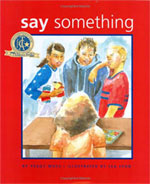 Say Something, by Peggy Moss, illus. by Lea Lyon

In the book, a girl watches other kids being teased and does not join in. She feels sad for the others. Then, in an emotional scene, the girl becomes the butt of other kids’ jokes. She gets mad at the kids at the cafeteria table next to her, and when she shares her anger with her older brother, he comments lightly that she shouldn’t be angry at them; they didn’t do anything. “Right,” she says.

The author’s light touch left a lot for our kindergarten and first grade children to puzzle out.  And our children did talk with one another. The vulnerability they shared in those quiet moments spoke volumes about the comfort they have with each other. Our children have a community in which it’s safe to talk about being sad, being teased, or times they’ve hurt others. What a wonderful knowledge for them to carry as they walk in the world.