The Children Help Each Other Understand Genesis 2

Discussion of the Story of Bereishit

Adam and Chava in Shorashim: What Does it Mean to Break Rules?

Our exploration of the Adam and Chava story from Bereishit this morning in Shorashim was framed by a  kibood-time discussion  of the rules we encounter in our own lives. We started by naming some of the rules that affect us (including “No jumping on the bed,” No poking eyes,” and “No running in school”). We moved on to discussing the reasons behind these rules, eventually agreeing that rules were one way of keeping us safe. The kids were  very enthusiastic about listing the consequences they encounter at home and in school for breaking rules.

With all these ideas foremost in our minds, I launched into the telling of the Adam and Chava story. Afterwards, many of the learner’s responses and questions centered around the story’s central conflict: would they have acted the same way Adam and Chava did if they were in their place? Would they have broken the rule God gave to Adam and Chava? I was very excited to see the learners placing themselves in the narrative, and empathizing so strongly with the Torah characters. 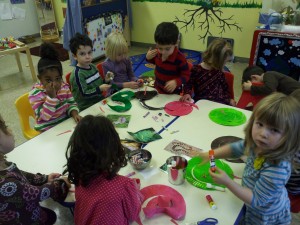